There are several components to the electrical part of this project. They are

There are a number of connections requried for the Hidden Screen. They are Screen Power, Media Player Power and IR Extender. The IR Extender will be detailed later, so I will concentrate on the other items. Power for the LCD was straight forward as it only required the use of a standard IEC power cable. To control the LCD, I used a ‘WD Live’ media player mounted on the backing plate next to the computer monitor. This allowed the IR receiever to pick up enough signal through the perspex. This was connected to the LCD via a HDMI cable. A USB Stick provided the source for the video – in this case a DVD of a real fireplace. The Media Player used a low voltage cable with a plug pack. The plug pack was mounted inside the fireplace itself.

The three cables were cable tied to the slider in a way that they could go in and out without any problems.

The IR Extender can be seen on the photo below on the top shelf. This unit has the provision for a number of IR inputs and outputs. One of the IR receievers was mounted just behind the perspex, and another was mounted in the Master Bedroom. The Master Bedroom IR was actually connected via CAT-5. It was connected to a cable which went to the main patch panel, and was then patched through to the bedroom. This allowed the Cat-5 to be used for something other than a Network. 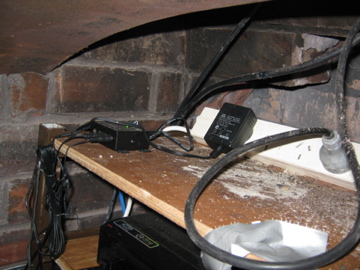 You can see the IR Transmitters on the BluRay player, AppleTV and Cable TV box.

As noted on the other pages, all the electrical connections are terminated in the garage on the floor below the fireplace. This next photo shows the cables as they come through the concrete, and get terminated on a number of wall plates. Going from right to left, the first two wall plates are for the surround sound speakers, followed by CoAx and then Six Cat-5 sockets.

The speaker connections are made using thick automotive grade wire, terminated with bannana sockets. I soldered Bannana plugs onto the wires coming from the surround sound amplifier making connecting things simpler. The speakers are mounted on the walls, with either flying leads or a bannana wall plate, depending on the location.

All the CoAx went to the Patch Panel, as did the six Cat-5 cables.

You might be wondering why there are four CoAx cables being used. Well, there is TV Antenna In and Cable TV In. Then there is Cable TV Out (since the Cable TV box also outputs on a UHF channel as well as standard video and audio connections), which goes to a splitter box. Then one of the outputs of the splitter box on the patch panel comes back to go to the Plasma TV. Other splitter outputs go to the TV’s in the Master Bedroom and also the Kitchen.