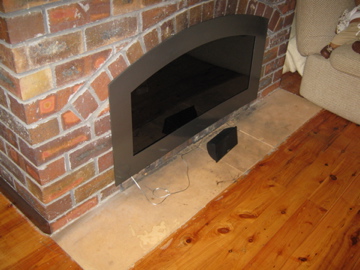 The first stage of this project was to build the shelves for inside the fireplace. These were made from 1″ steel angle and square tube and welded together. Thankfully just before I needed to build these, a friend of mine purchased a large MIG wilder so I was able to try it out. I had recently also completed a wleding course at the local evening college so building it was fairly easy. The important thing was to keep everything square. The angle on each side not only provided lateral support but acted as brackets to hold the shelves in. Importantly, the shelves were designed so that they could slide out if needed. 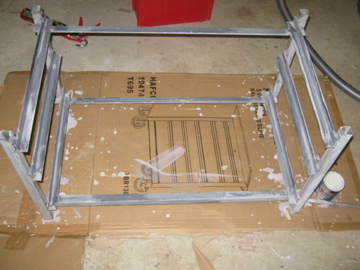 Once the frame was constructed, it was painted with undercoat, followed by an enamel final coat. 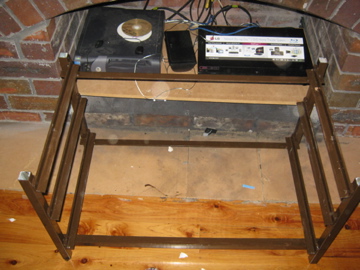 The frame was just large enough vertically to fit into the fireplace. The width was such that there was sufficient clearance on each side for the sliders. Most of the equipment ended up getting mounted on the lower two shelves. The upper shelf occasionally gets a bit of soot or the occasional leaf on it. Eventually I will remove the chimney and this problem will go away. This does mean that it is unlikely that there will be too much heat build up inside the fireplace from the electronics. 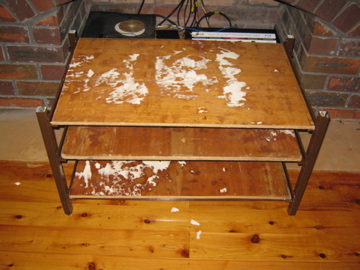 The AutoCAD file for the fireplace appears below, rendered as a PNG file. It cost $224 (2010) to have this cut in 3mm Aluminium. The red and green lines were guides for me – with the red line indicating the side of the actual fireplace cutout, and the green line indicating the size of the required perspex. The inner shape is actually for mounting the video screen onto, with the circles with their radiating holes for sterio speakers, and the centre holes being three sets of 100mm VESA mounting holes. 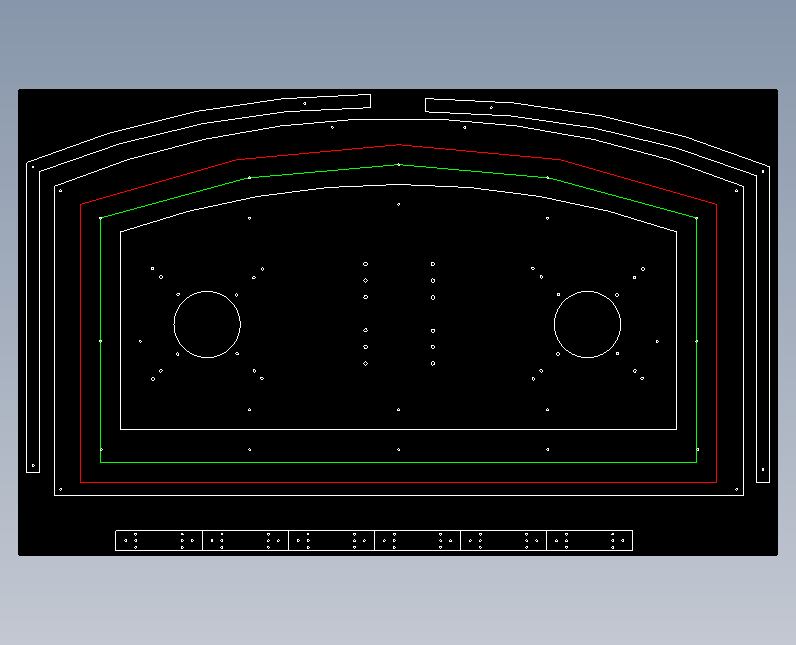 The long skinny pieces of metal on either side were to be attached to the back and top of the outer D shaped structure to provide some depth. The six joined pieces at the bottom are brackets designed to connect between the inner and outer pieces of aluminium. The three holes at either end are there to provide a bending point. You can just see the 19″ monitor mounted to the backing plate.

The sections were attached using aircraft grade aluminium solid rivets. If you do things properly, the rivets will be barely noticable on the front. 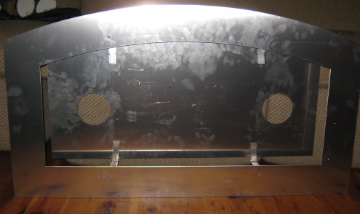 Without paint or a piece of perspex in front, the arrangement is fairly self-explaintory.  I ended up needing to install stiffening bars at the top and the bottom to stop the brackets rotating. 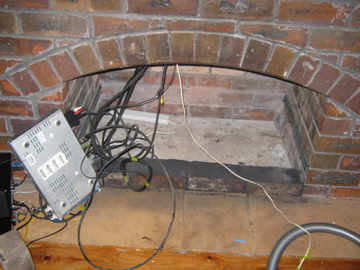 The next stage in the process is to attach the rollers to the fireplace and to the metalwork. This may take some trial and error. I chose 600mm rollers and this worked fairly well. Without removing the layer of bricks at the back of the fireplace, I would only have been able to use 450mm rollers which would not have been long enough.

As you can see, the stand fits snugly inside the fireplace, but is small enough to allow the rollers on each side to move freely. 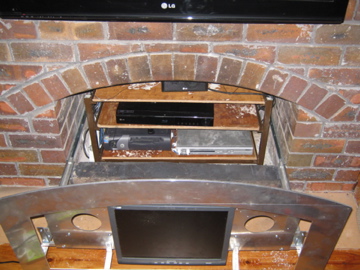 The monitor is visible here. It is bolted to the backing plate using the VESA mounting holes. The holes for the speakers are not used at this point in time. The monitor is a standard LCD monitor with HDMI input. Thankfully most monitors have a auto-power on these days, so the monitor goes to sleep in the absense of HDMI signal. The backing plate should be painted with a matte black spray paint so as to hide any reflections.

The next two photos show the attachment of the structure to the sliders. I worked out that the best way to organize things was to use some brackets that would normally have the top leaning out, and then using steel wire to pull the structure vertical. This ended up working fairly well. 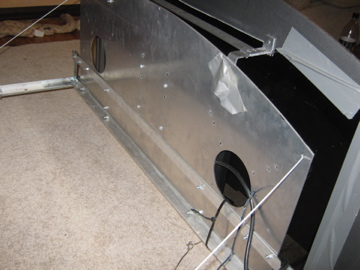 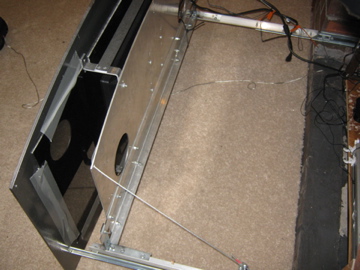 I should probably talk about the perspex here. The perspex is standard gray perspex about 3mm thick. The colour is important. Since I wanted to have a video screen behind, it is important to choose a colour that is neutral – that is, does not filter any colours but rather makes all colours darker. Since the perspex is fairly light, it was attached to the inside with tape. This allows it to be replaced if needed. The perspex sits on the brackets at the bottom giving additional support.

In this last picture, you can also see some electrical cables on the upper slider. These included a power cable for the LCD, Media Player Power and Remote Control Extender