The lounge room of The Crazy Engineer’s house is not small at about 4.5m x 7m. On one end there is a feature wall of dark brown bricks with an inset open fire place. I should note here that the fireplace has been used to my knowledge exactly once since 1979. The house was built in 1976, and whilst I cannot vouch for pre-1979, I suspect that it basically never got used. You see, the fire place never really worked. Not sure if it was the chimney or what, but the one time it was used, smoke filled the house. Even using an electric fan to create a forced draft did not help all that much. So during the three decade period from 1980, the fireplace was basically wasted space. The mantlepiece above it got used, and a picture got hung above it, but it was basically a waste. 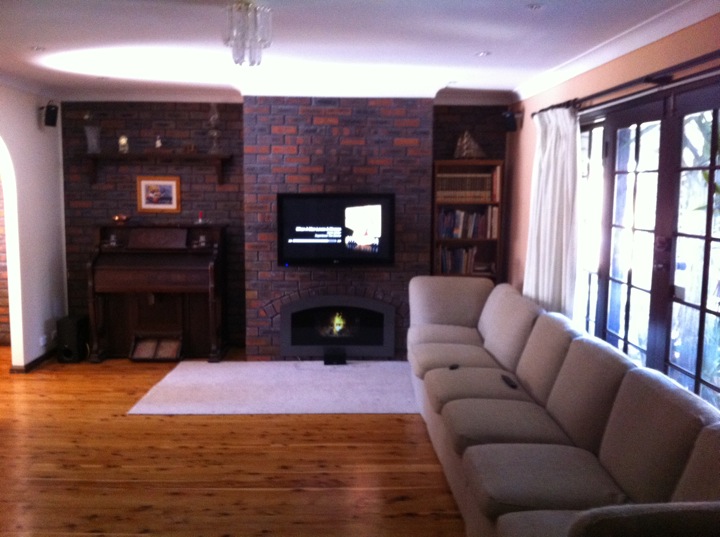 Come the major renevations, and something had to happen to the fire place. Knowing that the fireplace was a waste, we came up with a plan to improve the look and functionality of the whole fireplace. The design elements for we came up with were:

This of course required a LOT of work, not the least of which with the hammer drill. I do have a recommendation here – if you are looking at doing a similar project, make sure you get a decent Rotary Hammer Drill. These are more expensive than a normal hammer drill, but are worth the expense. They make drilling into brick and concrete a breeze. I wish I had learnt about them years ago. They cost under $100 from the local hardware store. One warning – be very careful with their use. Be prepared for whatever damage gets done if they sieze. One risk is getting a broken wrist, but to be honest that is the least of your problems. More dangerous is if the drill catches when you are drilling into a wall. This has happened to me, and the body of the drill swung around and hit my forehead. I did not loose conciousness, but I did get a bad headache and needed 11 stitches. Beware! 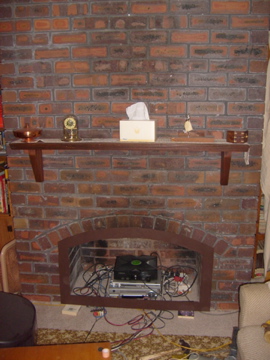 The common theme here is to carefully use the rotary hammer drill. This will make a lot of mess. You might be able to keep things a bit cleaner by using a drop sheet and a vacuum cleaner, but basically, it will be messy. The holes need to be large but not too large. There will be a tendency for the hole to get smaller as it gets deeper. This can be counteracted to a certain extent by using the rotary hammer drill to drill a lot of holes around the edge of the hole you want to create before using the jack hammer attachment. 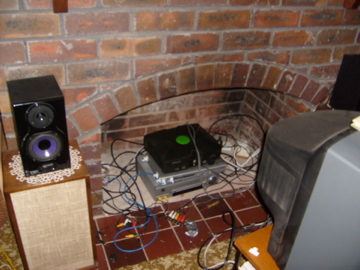 The Hole in the Fireplace

The hole into the chimney from the front of the fireplace had some complications. I wanted to ensure that I did not damage the brickwork on the facade, and the fact that the hole was horizontal meant that brickwork would not naturally fall out of the hole. This did mean that I needed to stop periodically to remove rubble from the hole. The chimney itself was a metal tube encased in brickwork. Thankfully the jackhammer made light work of this. One hint here is to remove more brick from the hole than you think you will need. Because we will be feeding cables through with a 90° bend, any extra space will make things easier. Another hint is to make sure that the hole is large enough for a power cable for your plasma TV. And I mean large enough when you have a few HDMI cables already in the hole.

The hint with mounting the bracket is to locate it lower than you would think. People normally think about mounting things on walls at eye level, or slightly higher. Flat screen TV’s are a bit different. They still need to be installed at eye level, but in this case, eye level is much lower since people watching a TV will be normally sitting down. There are exceptions to this, such as a TV in a kitchen, or maybe a bedroom, but generally a flat screen TV needs to be mounted fairly low on the wall.

Bolting the bracket to the wall is fairly simple. Most brackets come with more than enough mounting hardware, and I tend to go a bit overboard with the number of bolts. One trick when installing the TV is sometimes to install the cables before you put the TV on the wall. Getting access to the cables at the back of the TV can often be quite difficult.

The hole in the base of the fire place

In my case, the fireplace is on the second story, with a garage underneath. I decided that I was going to mount any sockets for power or communications in the garage rather than inside the fireplace. This turned out to be a fantastic idea. It makes it MUCH easier to terminate the cables, and much easier to install new equipment. In my case, the concrete was about 8 inches (20mm) thick with steel reinforceing. This made creating the hole difficult. Having to use the jackhammer to cut the reinforceing in the hole did not make things easier. Once again, the important thing was to ensure that the hole was large enough to feed through a power cable whilst the hole was filled with various other cables.

At the same time, I removed the tiles in front of the fire, and the ones inside the fireplace. This was fairly simple with the jackhammer. I also removed one layer of bricks at the back of the fireplace since they were not compatible with my design. Structurally this was OK since there were about three layers of bricks at the back, but I still needed to be careful with the removal of the bricks, just in case the brickwork collapsed by accident.