This project tells of a disaster that turned into a less minor disaster which turned into a success. It should have been fairly simple, but became more complex than it should have. This is the case of the peeling ceiling. There were actually two problems experienced by The Crazy Engineer. The first was that the old exhaust fan had been replaced by a more modern unit with heat lamps and light – an IXL Tastic. The second was that the paint was peeling. I tried to repair the hole where the old exhast fan was located , and did an OK job. But trying to repair the paintwork did not work all that well. 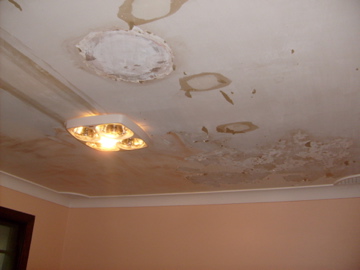 To remove the paint, I tried to use Citristrip Paint Stripper. You can see the results. The end result was that I learned that Citristip does not work all that well on plasterboard, and makes things much worse. You can see how much worse in these photos. 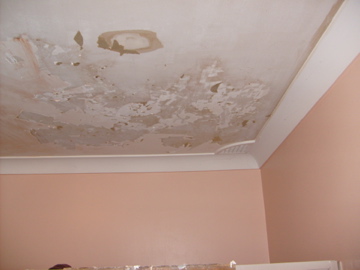 So, how to repair the damage? Well, there is the correct solution, and there is the way I did things. The first thing to understand is that this is not a job that one person can do. Two can do it, but three is ideal. And I am not an expert, but I did a good job.

So what is the wrong way to fix this problem?

Comparing the Right Way and the Wrong Way
If you compare the two lists carefully, you will notice that they are almost identical. In fact, there is only one step that is different. My big mistake was to remove the old ceiling first. This makes things much worse for you, in so many ways.
Removing the Cornices
This step is fairly easy. Just use a solid paint scraper and you will not have too many issues.
Attaching the new plasterboard to the ceiling.
This really is a two person job, or a three person job. You can get supports that will really help, but these are just one more thing you need to spend money on. So, my solution is this
The last step is important. Learn to use plasterboard joining paper and buy a bucket of pre-mixed jointing compound. You will get much better results if you do.
Replacing the Cornices
To replace the cornice, you will need a cornice mitre guide. Start on the least visible corner of the room, and go out from there. Start on the most visible wall adjacent to the least visible corner. For me, the least visible corner was above the door, and I first replaced the cornice over the vanity rather than towards the shower. I used builders glue to attach the cornice, followed by nails or self tapping screws that would be removed when the glue was dry. If you measure accurately, you should be able to get the three sides looking quite good.
For the last side, measure but cut it slightly long. Maybe 2-3mm. Then cut it in half. Install one half and then the other half. It is much simpler to fix cornice cuts in the middle than in the corner. Then use plasterwork finishing paste to fill the holes from the screws and to fill the holes in the corners.

The last step is to seal the plasterboard with sealing paint, and to paint the roof. With some luck, the roof will look like new.