I did some work for my local plumber, and in return he did some excavation work for me in my back yard. The excavator is actually only 1m wide, meaning it can get into even the tightest spot. The idea was to move the dirt from the lower level of the back yard to the middle section, leveling it at the same time.

This next photo shows the excavation that I was left with. The treated pine logs ended up being mostly burried. This meant that I did not need to get an engineers certificate for their design or construction. The idea was that pretty quickly the logs particularly on the right side would be buried so only about 50cm was above ground level. In additon, I was planning on building a facade in front of the logs and back filling with concrete to make the wall structural. You can just see the sewer and storm water pipes on the left side of the dirt.

On the right side I left about 80cm dirt to the property boundary. This allowed me to install a 20cm wide besser block wall and maintain about 1m from the boundary. 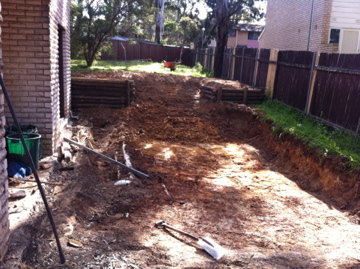 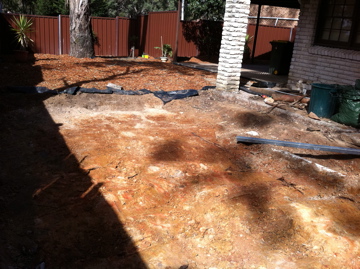 It was important that the dirt remain stable whilst I built the lower retaining wall. The change in height between the two levels was about 1.2m from lower ground level to upper ground level. Therefore I split this into two retaining walls of 60cm so I did not need any engineering certificates or approvals.

You can see the two breaks in the wall on the lower level. The block wall is mounted onto the slab on the left side. The two holes are there to allow the various waste water services to pass through. 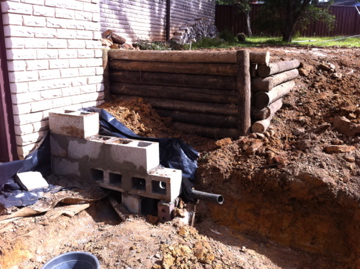 The bottom layer below was layed on a layer of mortar onto solid sandstone. You can just see the string line on the lower level allowing me to get the bricks level. In order to give the wall additional strength, I generally filled each of the bricks with mortar. Ones at the top sometimes got some stones to add bulk. This was not technically needed, but I figured it would not hurt.

As you can see, with rain, the clay turned into a mud pit. This made it slightly easier to move the clay and move it behind the retaining wall.

This photo shows the complete retaining wall. The wall was not perfectly straight, but did not need to be since it was going to have a facade placed over it. 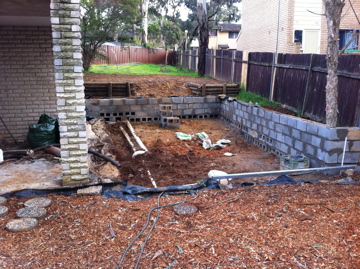 Just to show what the base sandstone looks like, I took this photo. It also shows the sewer and stormwater pipework.