The seats around the edge of the area are actually covers for the retaining wall. This cleverly provides seating and also provides an interface to the other areas of the garden. The seats were made from 200x50mm treated pine sleepers. I purchased ‘green’ sleepers, and these shrunk and warped somewhat after install, but the price was significantly reduced. 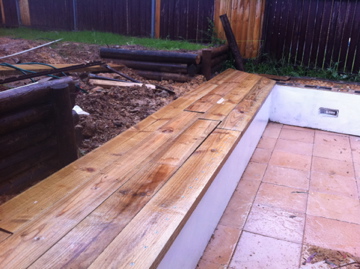 The first step is to ensure that there is a stable base for the sleepers. At the front there was a continuous wood beam attached to the retaining wall that the front sleeper was attached to. I ended up using a countersunk screw every 100mm. This was probably overkill, but it worked. Ensuring that there is enough support for the sleepers behind is equally important, but sometimes harder to arrange. Rock and offcut treated pine can assist here. 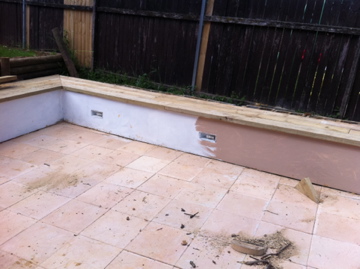 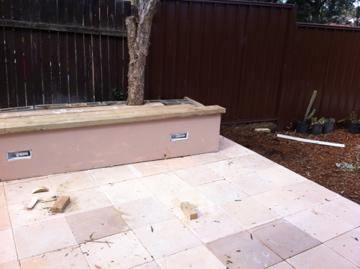 Once the front sleeper was installed, I connected the ones behind one at a time using dowels. The way found that was there best here was to purchase a stepped drill bit. These go from about 6mm to 20mm, over about 50mm. I placed the two sleepers next to each other in position and marked the top of both pieces about every 30cm. Then I separated them, and used the step drill to drill in the centre of the side lining up with the marks. Once this was done, I got a longer 10mm drill bit and drilled both sides to about 10cm. Then I put a 20cm 10mm dowel in each hole and knocked the two sleepers together. The dowel was flexible enough that any mis-alignment did not cause any issues.  This just needed to be repeated for the entire seat. 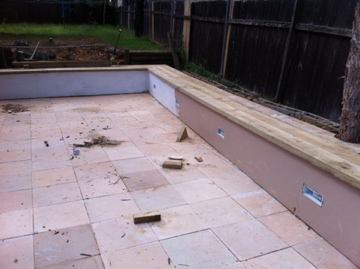 Once the doweling was done, I then left the seat to dry for a month. This caused the wood to bow in a few places. So then I got out the electric planer and went mad. Following sanding, I painted the seats. 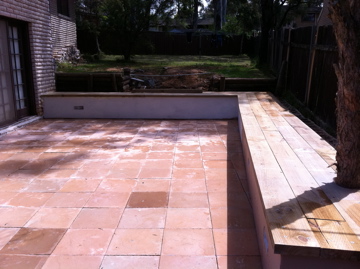