Installing roof insulation is not too hard. There are a few tips and a few things to keep in mind however.

The first tip is to ensure that you use protective clothing, particularly if using fibreglass insulation. But the roof space is quite dusty, and fibreglass insulation is a pain to deal with. So make sure you use long pants and long sleeves, gloves and a mask. I tend to wear two pairs of disposable latex gloves as they allow me to safely work in the ceiling whilst protecting my hands.

The next, and probably more important thing to watch is to make sure that it is not too hot in the roof. I try not to go into the roof at all during summer months. Unfortunately, I was waiting for the insulation to come in for months and it finally arrived at the start of summer. So, rather than wait until autumn, I decided to install the insulation first thing of a morning only. I would stay in the ceiling for only 20 minutes or so, and then would stay out of the roof until the next day. If it was still hot in the roof, I would not go up there. 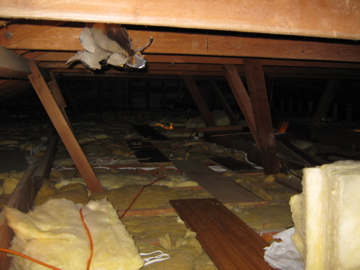 In order to make it easier to get around in the roof, I installed some boards from the manhole cover. These boards were from an old bookshelf, and were screwed down. They allowed me to more quickly move around in the roof space, significantly reducing the time to get from one end to the other. I also had a couple of power outlets installed in the roof, allowing me to use a light up there without worrying about putting it away each time. 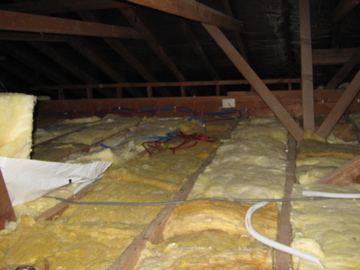 The current recommendation for insualtion in my part of the world is R3.5. The insulation already had some insulation in it, but this was old and probably R1.5 or R2.0. Rather than throw this insulation out, I simply rearranged it so that I would have two or three pieces of the old insulation on top of each other, using new insulation where everywhere else. This has worked really well. Fibreglass insulation works by trapping air, and over time loses a bit of thermal conductivity. But by using multiple layers, the result will be at least close to the new R3.5 insulation without the cost. This allowed me to save about 30% of the cost.

When installing insulation, it is important to ensure that any electrical cables under insulation are appropriately sized. This is a specialist area and I will not go into the details here. It is also important that insulation is kept away from lighting fixtures, particularly down lights and heat lamps used in bathrooms. The photo above shows some wood around the IXL Tastic. more work was done to keep the insulation away following this photo. A cover was also installed on the fan to stop air getting from the roof into the bathroom. That will be the subject of another story.

When installing insulation, you should always be thinking, what happens if I loose my footing. As much as possible, plan for this, and keep your body in a position where it would be mostly supported if you fall. Remember, it is better to put a foot through the ceiling than falling to the ground. Also, do the work with someone else in the house, just in case something does go wrong.

And finally, the roof space contanins many risks, including heat, spiders, electrical issues etc. Be careful!