My Solar install was fairly straightforward. The install does not work as well as it should, but this was to be expected before install. The reason is that there is a large tree in the way of the panels, and that completely wrecks the performance of the install. I have 18 panels on the roof with a 3 kW nominal rating. I have never seen this get over 2 kW due to the issues with shading however.

The install took two people a bit under a day. My bricks were a bit of a complication as they were not used to bricks that are not flat on the front. This did not slow them down much.

The inverter was installed on the northern side of my house. One thing I insisted on was having the wiring from the roof installed in the wall cavity. This was fairly simple, but did not impress the installers as it took a bit more time. Same with the 240V power cable to the meter box. In both cases, by assisting to run the cables, I was able to overcome their complaints.

The meter box has a large label including the details on the install. Often, an isolation switch would be needed inside the meter box and also at the inverter. However, since the two are close together, this was not needed. 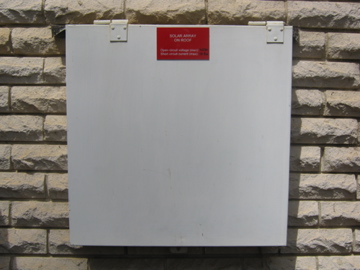