Basic Concept of the LCS

When I started looking at controlling lighting I worked at limiting the scope and determining what I wanted to do.

A few other functions have been added to the LCS over time, but these were never part of the original requirement.

Options for an LCS

When we started investigating an LCS, we came up with a few options. These included :-
X-10 was discounted as it was not mature, particularly in this country. This left C-Bus type Off The Shelf systems, and custom systems.
What we found when we investigated the options was that C-Bus and similar systems had a per light cost of at least $150, often getting as high as $250. This is per light. When you recognise that my house has over 50 lights, an install of a system costing $150 per light would get expensive.  We found that installing a PLC or RS-485 based controller was a far better option.

Ultimately, we chose for RS-485 based control, using hardware from a Taiwanese company named Trycom. Their hardware is well engineered, and rock solid, and forms the core of the LCS. I would make some changed to the Trycom hardware if I had the oportunity, but these would be for my preference rather than for any real need to fix deficiencies in their product set. <p>
Each light switch has been wired to connect to direct to the Trycom input module. Each light switch now runs on 12V DC, but uses 240V rated cabling so that it will be simple to remove the LCS if needed. There was a bug with some Trycom hardware early on where the units would not read the state of inputs after power on until at least one of the inputs had been state cycled. We tried feeding the switches with 12V AC but this caused problems with using the in-built counters in the Trycom hardware. <p> 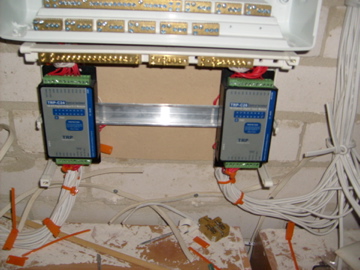 Each light is wired to the Trycom output module via a DIN Rail mounted 12V relay. Each group of 4-8 lights is connected to a circuit breaker. Using eight circuit breakers is probably overkill, but they cost about $2.50 and provide a disconnection point for each chain. This makes it safe to replace relays without disconnecting the entire house. The use of the circuit breakers also allowed for the use of 1mm cable for lights, limiting the current consumption. With the ever increasing cost of copper, I was able to save a significant amount of money by not even going to 1.5mm cable. 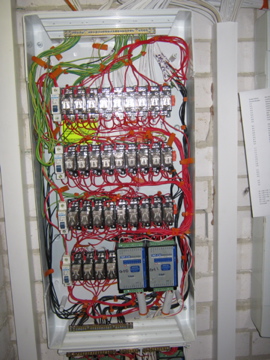 This comes out to be about $18.75 per light switch and $45 per light. This is not cheap, but it is much cheaper than the other commercial systems.
Of course the cost of getting a licensed electrician to install this hardware was not included, but was an essential expense. 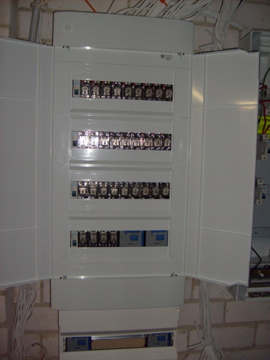 The Trycom hardware can operate in two modes – ASCII and MODBUS. The MODBUS mode appeared to be slightly buggy during testing, so we stuck with ASCII. This might have been an issue with the driver totally unassociated with the Trycom hardware, but in the end I moved the software to using ASCII mode. Since the driver software is custom written, this does not provide much of an impact. <p> 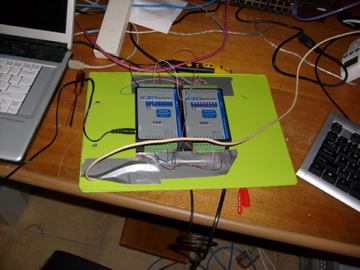